Joan D. Tong, 89, of Carey, passed away peacefully on Oct. 10, 2021, to be with her beloved family.
Joan was born on Aug. 27, 1932, to William and Helen Fern (Waggoner Vogel) in Fostoria. In 1990, they passed away two weeks apart in January and February. Joan married Richard E. Tong Dec. 18, 1954. He passed away Oct. 4, 1990. She also lost her only son, William (Salty) in 2000. Joan was preceded in death by her brothers, Donald L. Vogel and Gene Vogel.
Surviving are her cousins, Howard (Bud) William Balsat and Ralph Frederick. They helped her in many ways. She also had many nieces and nephews.
Joan graduated in the class of 1950 from Fostoria High School. She retired from Ex-cello (Airfoil Textron) after 29 years. Joan and Richard enjoyed fishing in Canada, flying in the back lakes several times in the summer. Joan loved flowers, especially her roses. She always enjoyed making candy, pies, wedding cakes and food for many of her friends and neighbors. She took care of her friends’ baby, Maggie Mie. She adored her and later when Maggie went to school, she wanted Joan to go to grandparent’s day for lunch and she would also take her to Chinese restaurants where they learned some Chinese words. She brought her a lot of joy in her life. Joan also helped her son with his business in Carey. She was a very busy lady who didn’t hesitate to help anyone who needed her help in any way.
She enjoyed her trips to the Amish in later years with her daughter-in-law, Heide Roesch. She was a member of Hope Lutheran Church in Fostoria, and was a confirmed member in 1945. In later years, when it became too difficult for her to go to church, the church secretary Karen Keckler would call often and Jay Hackworth would come and give her communion. She would like to thank neighbors Sue Thiel and Dan Beck for everything they did for her over the years, for all their help with the yard work, taking care of the house while she was at Pro medica Hospital in Toledo for a major surgery, taking her to many doctor appointments and fixing whatever needed fixed. She would also like to thank Aiden Jenot for his help with the lawn, neighbor Andy and his family, Jean Ann Swerlein and Bill and Jane Beach for all their many things they did for her and many others who helped her in small ways over the years. Joan had many surgeries over the years, unfortunately the cancer returned again recently and was too much for her body to handle this time.
A funeral service will be held Wednesday, Oct. 13, at noon at Harrold-Floriana Funeral Home, Fostoria. She will be buried in Fostoria Fountain Cemetery with her loving husband, son and parents. Visiting hours will be held Wednesday, Oct. 13, from 10 a.m.-noon prior to the service at the funeral home .
Memorials may be made to the Hope Lutheran Church, Fostoria. Online Condolences may be sent to the family at www.hffh.net.
This obituary was written by Joan herself. She wanted people to know a little bit about her life and also wanted people to know she appreciated everything they did for her. She was a special lady and will be missed by many. 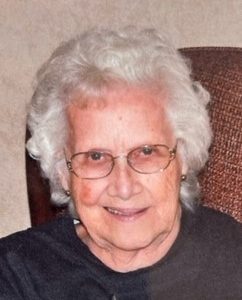